Some critic photo reviews at One day in Venezia

A professional critic review of their work is the new, additional feature of the One Day In Venezia Photo Contest awards for its monthly winners, together with: a fine art print and the participation to the finalists group show; the chance to win the Grand Prize. The critic reviews can be public or private; here follow some of the public critic reviews written by professional photographers.

Graziano Arici about Katia Morichetti’s: “No need for a caption…“ 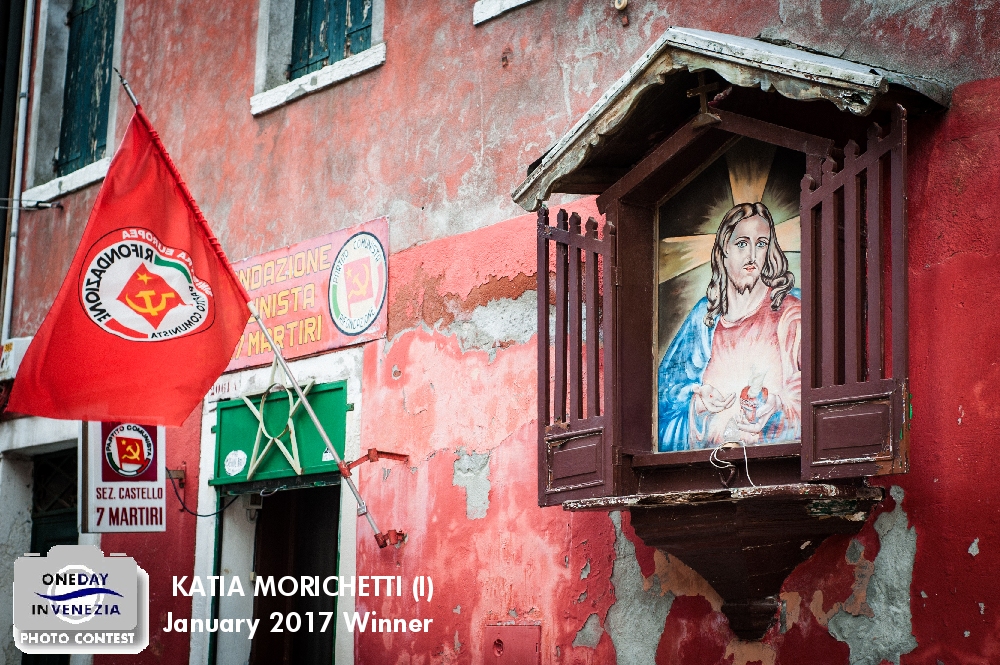 “I confess my surprise in seeing this photo awarded, as this shot has been taken by anyone passing by tis special spot in Venice, Castello. Then I realized what the jury criteria has been in selecting this photo, by comparison with other competitors in the same period of the ODV photo contest. This is an undoubtedly truly Venetian photo, as people in the know.. know. Venice connoisseurs may still feel the same as the first time they got there, perhaps by chance, without ever getting separated by that memory and contrast. I do not want to imagine that today’s tourists may have taken an inexorable selfie in front of these icons..  I hope not.
There is another aspect, peculiar of this photo by Morichetti’s: a repetitive and almost cabalistic geometry, as someone in ODV pointed out. Played on number three. Three cusps, three triangles, three symbols, three of anything. This reading is quite weird, beyond the image’s contents. Mysterious. Sacred, in a way.
Now it is clear to me how the choice is awarding a story teller; it is our story, though contradictory,  and whatever your belief, this image belongs to us.  Roots and cultural inclinations fixed in one shot can freeze and put in relation with something else, stimulating thoughts, memories, comparisons. And without the need of a caption, an explanation in words. Morichetti told a story in a single shot, and here the game was a little too easy to her – here’s the flaw, f I have to find one in my review – but I’m grateful she did: I have seen some other works of hers online, and I think they are  interesting, they are tasty and intelligent. We look forward to see others, keep up the good work.” 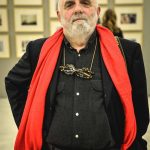 Graziano Arici, born in Venice,  is the author of several publications and reportages, witnessing the cultural life of his city. He gathered a huge photo archive related to events and people that enlivened the Venitian cultural scene from the Sixties to date. He has a intense and appreciated  exhibiting activity in Italy and abroad. 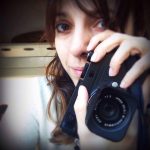 “My thanks to Graziano Arici – whom I admire and whose work I know – for this reading ba, non banal, developed on various levels, all interesting to me. I love Venice, very much, and taking pjhotos of Venice “without” Venice (without its the  “calli”, without its lagoon, without  St.Mark’s square and so on… ) has always been a challenge to me , because this Venice exists and it is charming. To me this photo, that many photographers have taken, with different solutions, represents the concept of revolution. The word “revolution” changes its meaning depending on when it has been pronounced, on its  historical period, and the photo shows two “revolutions”, opposed in some ways but also similar, that live together on a Venetian wall. Thanks again to all of you”.

Marco Missiaja wrote for OneDayInVenezia.com Photo Contest this professional critic photo review of Maurizio Zanetti ‘s awarded pic.  You can be inspired and stimulated by his comment! 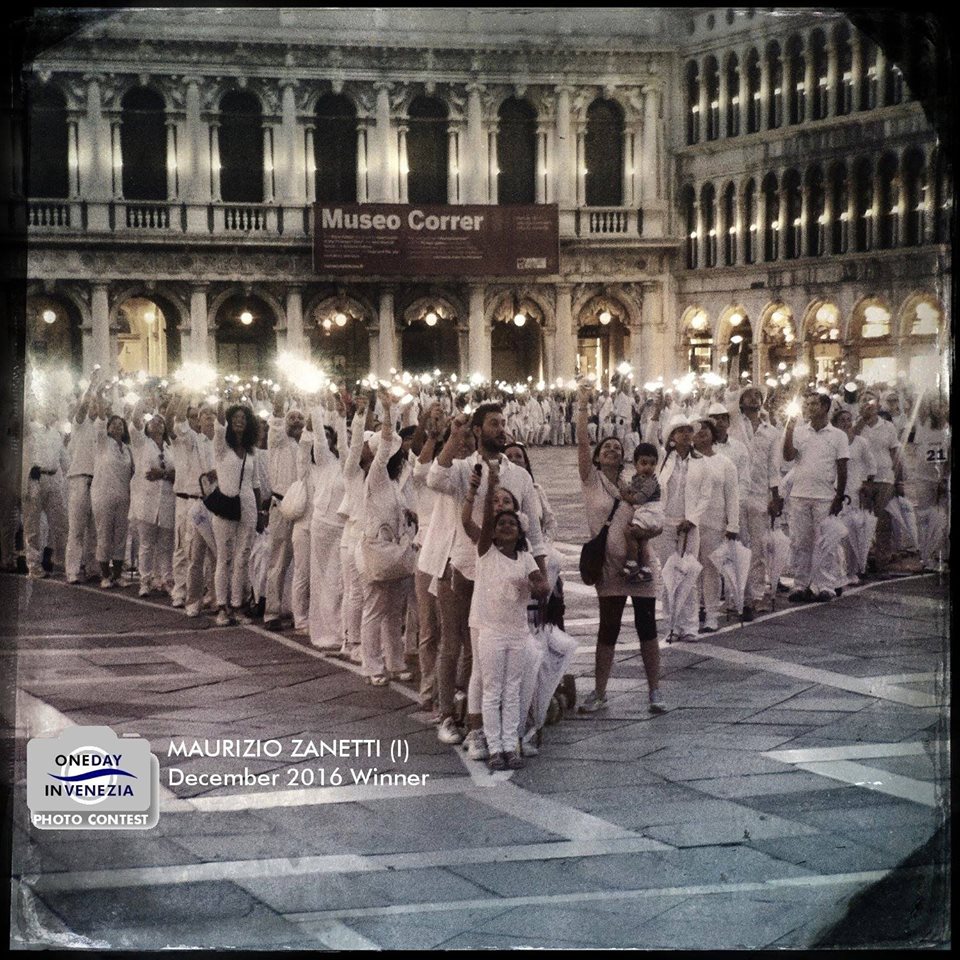 « The analysis of a photo is normally preceeded by a technical filter about the exposure, focusing, color balancing and composition, but above all a photo must convey an emotion, a feeling, communicate something to us.

This photo by Maurizio Zanetti tranfers a strong enthusiasm of the events, summarized by a choral and cheerful pose; the main moment consisted in having everyone lift their arms to create a symbol written with light, the same light illuminating St.Mark’s Square porticos and the participants’ smiling eyes.
From the technical point of view, the exposure is correct, expressing the evening time; the color is pastel  but greatly matches the feeling of the moment.
Those that may resemble as technical defects, such as the little saturated and the visible border, in this image reinforce instead the communication, making it timeless; it could have been shot in 2016 or 20 years earlier…
The scene composition is precise and balanced. The vertical line of the corner of the background palazzi is on the right at 2/3 of the image, with the Museo Correr banner beginning exactly opposed on the lest side, at 1/3 of the frame; both lines in the upper part balance the subject arranged in an arrow in the lower part, with the arrow point in the very center.
I am not enthusiastic about the blackened corners, and the scratching at the sides, though they contribute to change the temporal perception in this picture, matching very well with its texture and light colors.
The points of force of the image, showing us the author’s skill, are the perfect composition for the chosen focus in that very moment, and the ability to express himself in atemporal terms. » 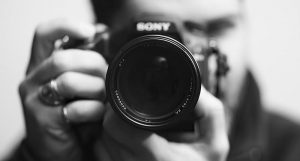 We thank for this critical review  Marco Missiaja , who has devoted himself to photography since 1989 identifying this art from the start as his favorite means of expression and communication.  From 1993 to 1996 he has worked as assistant at Istituto superiore di fotografia in Rome and for some pros in reportage for magazines and tourism entreprises. In  1997 he established his first studio in Rome; in 2002 he opened a shop in Venice for his works, and from 2007 to 2009 he exhibited in Belgium at Sint-Niklaas; in 2009 he opened his second studio in Venice, starting the production of his own Venice photo cards and bookmarks. He has become a specialist in architecture photography for hotels and businesses. In 2014 together with photographer Raffaele Tomasella he established “VENICEPHOTOART”, a space dedicated to photography in the centger of Venice, where he is exhibiting and selling his works, appreciated by clients from all over the word; and giving photography classes, and makes studio photography, including portrait, still life and fine art printing. 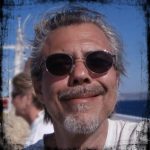 «That’s too good of you!! I think it is a very nice reading, telling things about the shot that I did not even calculate when I took the picture. Well, this is the way things are: if you have been taking photos for 40 years, the correct shot comes by instinct. You do not have to think about it. As someone said: culture is knowing something, without recalling where you have read or studied it. One of the (few) advatages of being over 60 🙂

Hugs! with my authorization for publication. Maurizio»

“If a photo must create some curiosity about a story…..” – Nicoletta Lupi reviews Cleve Schneider

Here follows Nicoletta Lupi ‘s professional Photo Review of Cleve Schneider ‘s pic. Cleve gave us permission for publication, so that also our readers can be inspired and stimulated by the comment! 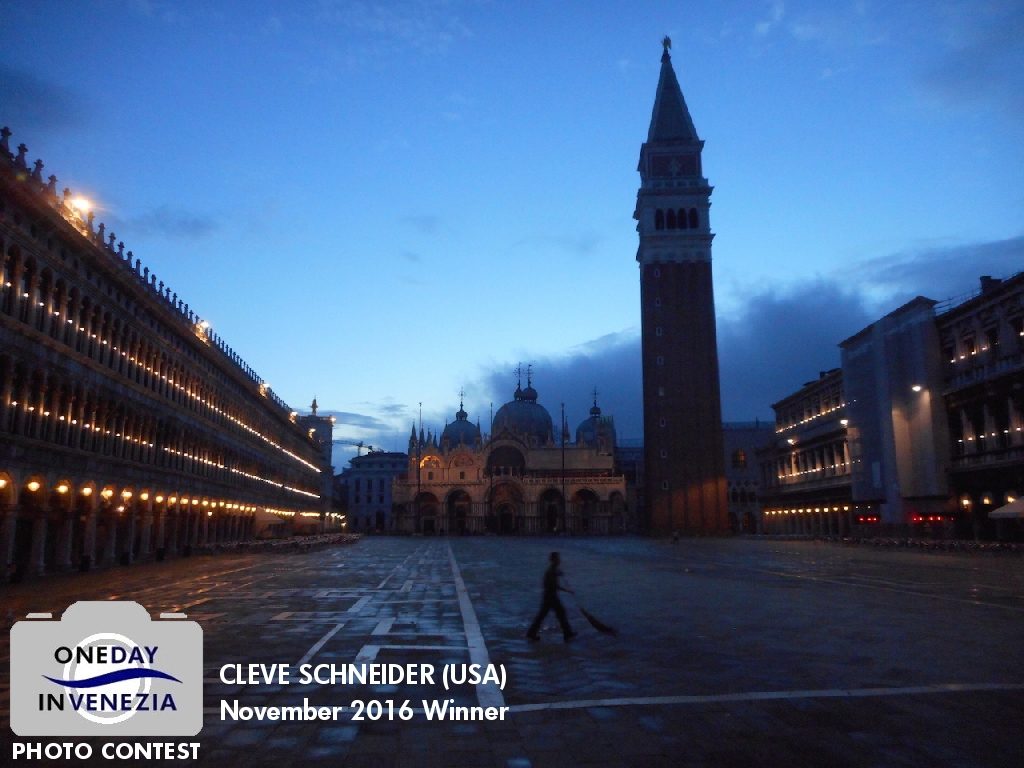 Here follows Nicoletta Lupi ‘s professional Photo Review of Cleve Schneider ‘s pic. Cleve gave us permission for publication, so to inspire also also our readers can be inspired and stimulated by the comment!

«A lonely man is walking in the most beautiful square in Venice. The lights of the palazzi are still on, and behind the Basilica, dawn starts clearing up the sky. Peace, and silence are all around. The party is over, people are back home, and music players have put their violins away. The man we see here has not joined the fun at all. It was not designed for him. But he is cleaning up the last remains of that enjoyment, all by himself, by night.  But to our eyes he looks like the master of the Piazza . The beauty of sunrise, the silent peace, the conquered calm are granting a magic moment to him, and just to him. If a photo must create an emotion, some curiosity about a story, a clue for reflection… well, then this image hit its target. We’ll never know if what we have seen in this image is true or not , or if this was a sunset or a sunrise. Or if there was any party on. As there is no sequence of image, just a single shot, without any description. It is all in a flash, caught and offered. The way it is. Such lights influence us to a poetic reading of the scene. In full sunlight, the effect would have been much different. But photography has its own composition rules, to make the image more or less effective. In this picture for instance, we have two vertical elements: the man and the belltower. The author could have used the two elements in opposition. This would have underlined how small the man is, and how fragile the human condition is. Also, to emphasize how fast we pass this life, and how the beauty of works stays untouchable instead. Measly everyday human tasks, versus magnificent art and nature. But to do this, the two subjects should have stayed along lines of force. A good suggestion could have come by the compositional rule of thirds. They should have opposed each other, gain strength and catch the view. Instead, in this shot the man feels lost in the image, the eye seeks for him but then gets distracted. The eye does not know where to stop. The bell tower is awry, seeming to fall  down,ruining the balance of the shot. Photography is work, had work. No shortcuts exist. Its rules must be learnt, internalized.. and then used like a sharpened pencil, to clarify one’s drawing or thought. For the rest, you have to open up your heart.»

Nicoletta Lupi is a

a freelance professional photographer since 1996. She is working mainly in advertising, industrial and fashion images. She has published books, and her images are found in fashion and interior design magazines. Besides this, she is developing personal projects in art photography. 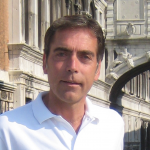 «Thank you for forwarding this critic photo review to me. I thoroughly enjoyed reading it and absorbing the professional comments. It will make me analyze scenes better when composing shots. Yes, you have my permission to publish it on the website! Cleve»